Readers of Mind the Gap,

I apologize for my absence in recent months.  As you will see from my latest post, I have been away with my wife as she is dealing with a serious recurrence of her lung cancer.  Our recent experiences continue to underscore the need for improved physician-patient communications in the doctor’s office and hospital. 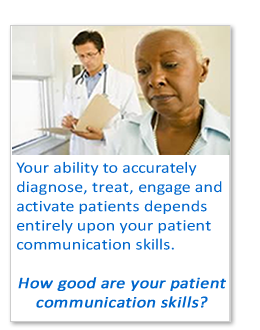 We often hear how physicians seem to interrupt patients almost as soon as they open their mouth to tell their story. It’s not because they are trying to be rude. Physicians interrupt patients because it doesn’t take them long to “size up’ the patient and arrive at a working diagnosis.

Once they arrive at a differential diagnosis, physicians will tell you that there is little to be gained (from their perspective) from wasting time letting patients ramble on. As physicians often remind me, they were taught to do two things in medical school…diagnose and treat the patients’ problem…not talk to patients.

My wife’s recent emergency room visit and hospitalization underscores “how wrong” physicians can be when they interrupt or ignore the patient’s story. Her (our) experience also underscores the costs in unnecessary diagnostic tests, pain and suffering, fear, frustration and loss of patient confidence (trust) that often accompanies experiences where physicians (and nurses) simply don’t listen to the patient.

You need to understand that my wife is a 10 year survivor of Stage IV Non-Small Cell Lung Cancer (no she never smoked). She is experiencing a recurrence of the cancer with mets to her liver which has caused a build-up of fluid in her abdomen. She is being treated by a very good team of oncologists and her cancer is responding to treatment. On the day of her ER visit, we were half way across the country from her treating physicians for the holidays. We had my wife’s medical records with us.

My wife presented to the ER physician with severe abdominal pain associated with her distended abdomen. The ER doctor quickly assessed my wife’s condition, seemed to listen to “our take” on what was wrong – excessive fluid build-up (scites) in her abdomen – and the need for an emergency paracentesis or draining of the fluid from her abdomen. Her oncologists warned us that such a procedure may be necessary at some point. For us this was that point. It was not to be the case however for her ER doctor and hospitalists.

Turns out the ER doctor was convinced that my wife had pneumonia and sepsis. The chest X-ray and CAT scan of her abdomen showed “cloudiness” in her right lower lobe of her right lung, a high White Blood Cell count, and fluid around the lungs and liver. These findings are consistent with possible pneumonia and sepsis…but they are also consistent with her history of lung cancer with liver mets. The radiology exams confirmed the cancer. Since my wife had a similar ER admission 5 months ago in the same hospital, they were able to compare the x-rays and CT scans to the same tests done 5 months prior. This hospital system also has an extensive EHR system.

Consistent with the diagnosis of pneumonia and sepsis, the ER doctor put my wife on IV fluids and antibiotics. While still in the ER, a hospitalist had visited my wife and concurred with the diagnosis of pneumonia and sepsis and the treatment plan. My wife, an RN, reminded the ER nurse that she was on fluid restriction associated with her condition…but my wife had been given pain medication and was not in a position to argue her case.

As my wife feared, her abdomen swelled up even bigger from all the IV fluids and her pain went off the charts (30 on a 10 point scale). She was having difficulty breathing and was convinced she would die before the doctors (or nurses) would discontinue the IVs and antibiotics and give her Lasix to help eliminate some of the fluids which were cause her condition to get worse. The ER nurse told me that if they did what my wife and I requested, remove the IV fluids and antibiotics, my wife could die. That’s not something I needed to hear.

By this time the original hospitalist went home and a new one came on shift. The ER nurse got the new hospitalist on the phone and the doctor reiterated to me the diagnosis of his predecessor. I suggested he actually examine my wife and listen to what we thought was the problem. The doctor eventually showed up, agreed with our story, and discontinued the IVs and ordered Lasix. The next day my wife had the fluid drained from her abdomen which greatly relieved her symptoms. She had one more paracentesis two day later removing total of almost 10 liters of abdominal fluid. She was discharged from the hospital several days later.

The reality is that if we had never left town (where my wife’s oncologists were located) she would have gone to the hospital ER, had the paracentesis done and be out of the hospital the same or next day. But that is not what happened.

Instead she was out of town, her doctors ignored her story, and as a result went off on a wild goose chase treating a phantom problem at considerable expense, pain and suffering. While it is true that doctors are human, that in no way excuses them from soliciting and listening to the patient’s story – their perspective of what is going on. Being busy or being pressed for time is not a legitimate excuse for misdiagnosing and mistreating patients either. Sir William Osler’s admonition to medical students in the late 19th century is applicable today, “Listen to your patients and they will tell you the problem.”

Listen to your patients and they will tell you the problem.

Here is the advice I would offer any physician or physician stakeholder who cared to listen:

As strange as it may seem, physicians often lack the communication skills and experience needed to accomplish these seemingly basic, simple tasks…but it is true. Keep in mind that many physicians simply are not trained nor inclined to engage patients as described above. These skills however can be taught and physicians can learn how to integrate these patient-centered communication skills into their daily routines. The first step however is to recognize that there is a problem.

I know because my company works with physicians, hospitals and health plans to assess and improve their patient communication and engagement skills every day.

This entry was posted in Uncategorized. Bookmark the permalink.